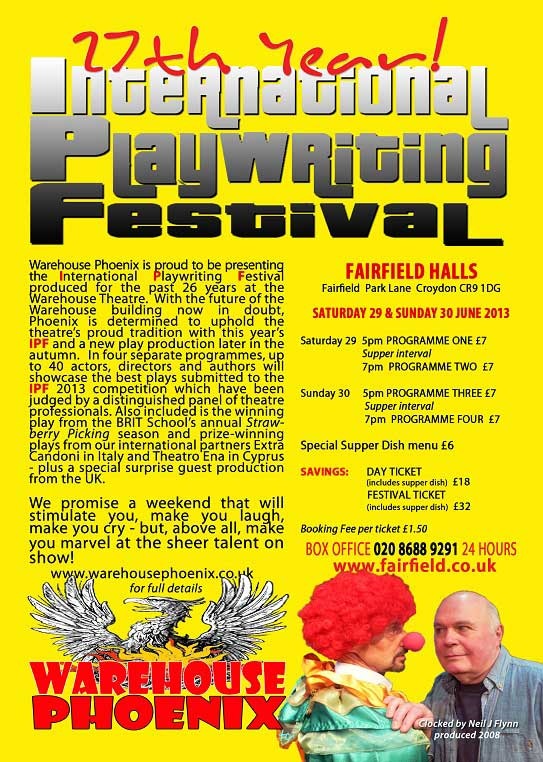 presented at Fairfield Halls on Sat 29 & Sun 30 June 2013
Saturday 29 June
5pm
BRIT School SUPERNOVA
by Jesse Batesond
Two couples struggle to come to terms with their own destinies.
Sometimes we just have to wait and see what's in the stars.
IPF selection KICKING SNOW
by Chris Dunkley (London N16)
A fascinating play which takes place across the period of a week
which we see from three different perspectives.
Clever writing from three viewpoints makes compelling viewing.
7pm
Guest visiting production DEE
by Mark Norfolk
Blair's Children recently played a successful season
at the Cockpit Theatre. A contemporary version of Kennedy's Children,
it was played by five actors, each role written by a different author.
IPF selection A NIGHT OF DARK INTENT
by Patrick Carmichael (Briarwood, New York, USA)
This very funny play takes place in London on the evening of 3 January 1895.
Sherlock Holmes and Dr Watson have been to see the opening night of
Oscar Wilde’s An Ideal Husband. In the course of the evening Oscar Wilde
visits the duo as well as Queen Victoria! Wildean wit and epigrams aplenty.

Sunday 30 June
5pm
IPF 10 min snapshot BLUE POINT
by Kyle John Schmidt (Montezuma, Iowa, USA)
The play tells the story of two teenage boys growing up in the rural Midwest.
The inexpressible urges of adolescence reach a horrifying climax.
Tightly written with excellent charactisation.
IPF selection HONOR STUDENT
by Michael Erickson (St Louis, Missouri, USA)
A student in a college creative writing class writes a story about a student
who begins shooting his classmates and instructor.
Fearful that the story is a blueprint for a real shooting, the instructor alerts university officials
But the student fights back... An up-to-the-minute subject, tightly written and suspenseful.
7pm
Looking back on 27 years of the IPF...
MARK NORFOLK
in conversation with
JEREMY KINGSTON
drama critic of The Times
IPF selection THE ROAD TO NOWHERE
by Sean Cook (London N1)
Geoff’s house is atop a crumbling cliff on the Isle of Wight.
He has lost his naturist wife who fell off the cliff and
now his gardener, Denise refuses to mow his lawn because of the danger.
Gurth, his neighbour has already made plans to move to an estate near-by
but Geoff wants to stay put with his cat, Stan... Great characters in a funny, touching play.